Mammary cancer is the most commonly occurring of all cancers in female dogs. Despite its prevalence, discovering lumps along your male or female dog’s abdomen can be alarming.

Thankfully, around half of all mammary tumors are benign and can easily be treated surgically. Malignant tumors, on the other hand, are not so straightforward.

This article discusses the most common types of mammary tumors, their symptoms, methods of diagnosis, treatment options, and prognosis.

What Are the Symptoms of Mammary Cancer in Dogs?

Knowing the signs of cancer in dogs and detecting it early on is essential to provide the best chance of treatment and recovery.

The symptoms of mammary tumors in dogs include:

What Does Breast Cancer Look Like In a Female Dog?

The primary sign of breast cancer in dogs is a lump, or lumps, in the mammary glands. Most dogs have between eight and ten nipples and typically develop about five mammary glands, with each teat having 7-16 duct openings [3]. Mammary tumors usually start as tiny lumps but grow rapidly.

The tumors can be felt in or near the nipple, and the size and appearance of the lumps vary according to the type of tumor. Some may appear red, swollen, and inflamed, while other lumps could be hard or soft.

(for the graphic designer, create a graphic with photos of the different manifestations of breast cancer in dogs) 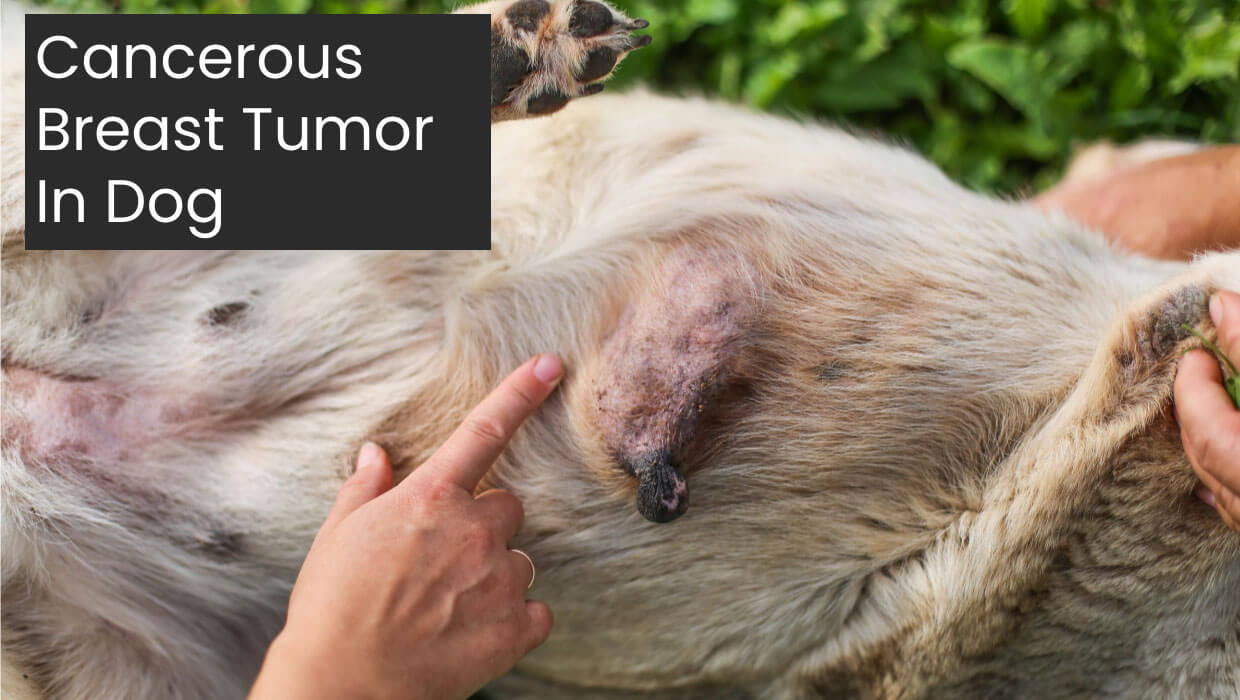 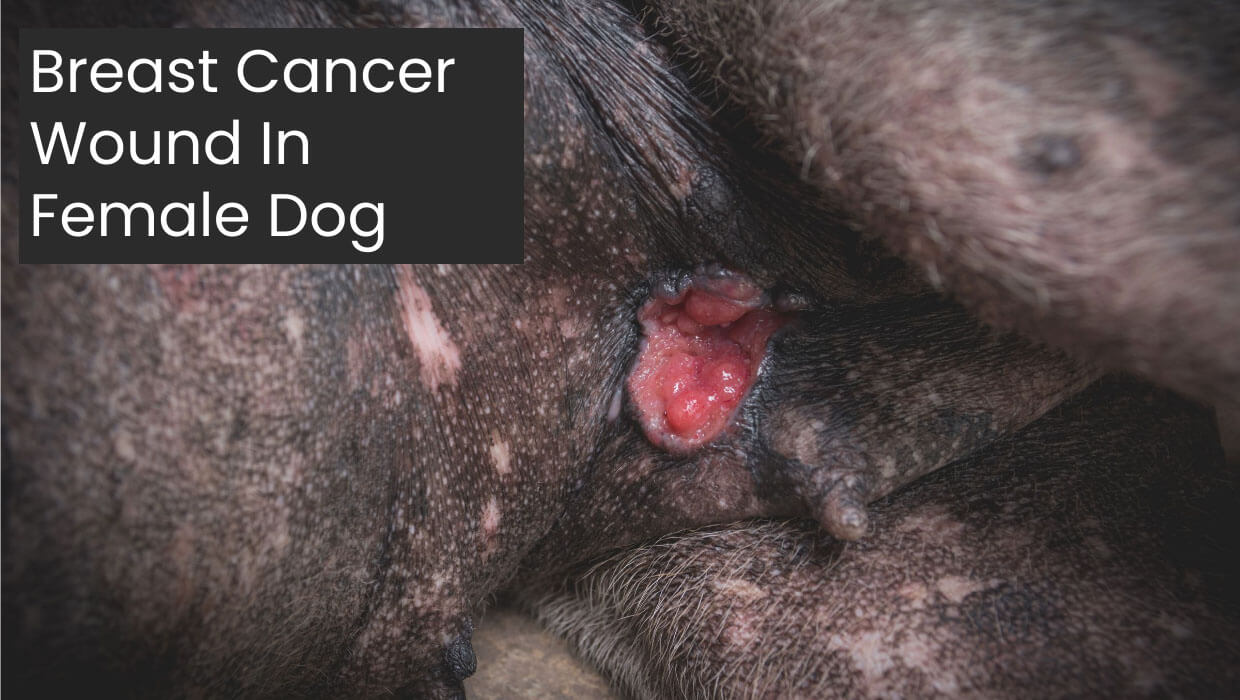 What Are the Causes of Breast Cancer in Dogs?

Mammary tumors are the most common cancer developed in female dogs [4]. Despite its prevalence, the causes of breast cancer in dogs are not thoroughly understood. However, there is some evidence that exposure to increased progesterone levels could cause cancer development [5].

Progesterone stimulates the secretion of growth hormone—tumors develop due to cancer cells dividing and growing uncontrollably [6][7]. The increased levels of growth hormone could cause these rapidly multiplying cells to do so even faster, leading to the development of mammary cancer.

What Factors Increase the Risk of Developing Breast Cancer?

Although there is no way to predict whether or not your pet may develop mammary cancer, some factors could increase its chances: 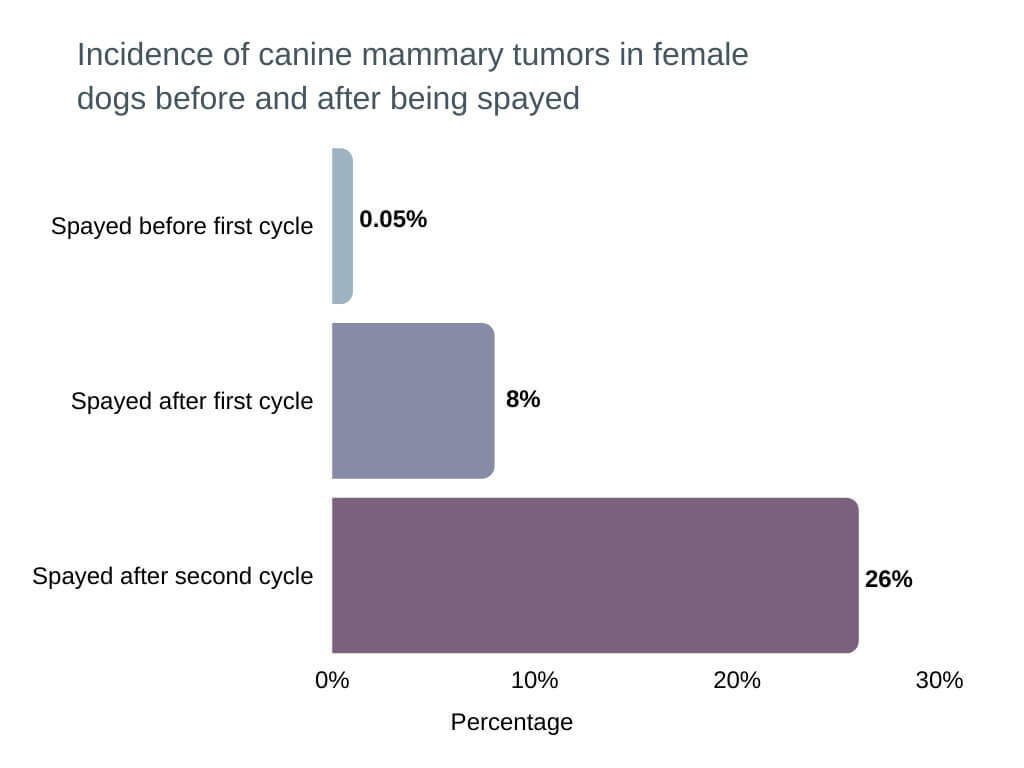 What Breeds of Dogs Get Breast Cancer?

The diagnostic process of possible mammary cancer can identify the type of tumor your pet has. Some of the most well-known include:

Early detection of mammary masses is vital to your dog’s correct diagnosis and treatment.

Before the diagnostic process begins, your veterinarian will ascertain whether your dog has recently given birth or gone through a heat cycle.

Mammary gland hyperplasia produces lumps around the time of a female dog’s heat cycle. Hyperplasia is caused by hormonal imbalance [18]. It typically dissipates once the hormones return to their usual concentration.

A physical examination can confirm the presence of a tumor in your dog’s mammary glands. The examination can be done at a veterinary clinic and involves a vet examining the teats and any lumps present beneath or around the nipples.

However, a physical examination of your pet cannot determine the type of tumor present. To do this, further tests are required.

Once the mammary gland that has the tumor is identified, further imaging tests like chest x-rays, a CT scan, or abdominal ultrasound may be conducted to gauge the extent of the mammary tumor growth [19].

A urinalysis and complete blood count can help assess whether the tumor has affected any other organs or bodily functions. These tests are also helpful in deciding if your dog is the right candidate for surgical removal of the tumor.

A fine-needle aspiration (FN) is a type of biopsy during which a veterinarian inserts a needle into the tumor and withdraws a tissue or fluid sample. Fine needle aspiration can help your vet determine whether the mammary mass is a cyst or cancer.

If a large enough sample is taken, an FNA could help identify whether or not the tumor is malignant [20].

Your veterinarian will conduct a biopsy to identify the type of tumor your pet has. The vet will remove a small part of the tumor, which can be studied under a microscope to determine precisely what kind of growth your dog has.

Once a vet has concluded their diagnosis, the type of tumor present will help them recommend the best treatment options.

Surgical tumor removal is still the most commonly recommended method for treating breast cancer in dogs [21].

During the procedure, which can be done in a veterinary hospital, as much mammary tissue as is reasonable is removed to ensure the gland containing the tumor is eliminated.

If more than one tumor is present, surgical removal of the entire mammary chain may be necessary.

The cost of mammary tumor removal depends on the number and size of the growths present.

Surgery to remove one mammary gland typically costs about $500. For removal of a mammary chain, a total mastectomy may cost more than $1,000 – $2,000.

Besides spaying your dog before her first heat cycle, which helps to reduce the risk of developing mammary tumors, it could also help increase the life expectancy of dogs with mammary tumors if done less than two years before tumor surgery [22]. 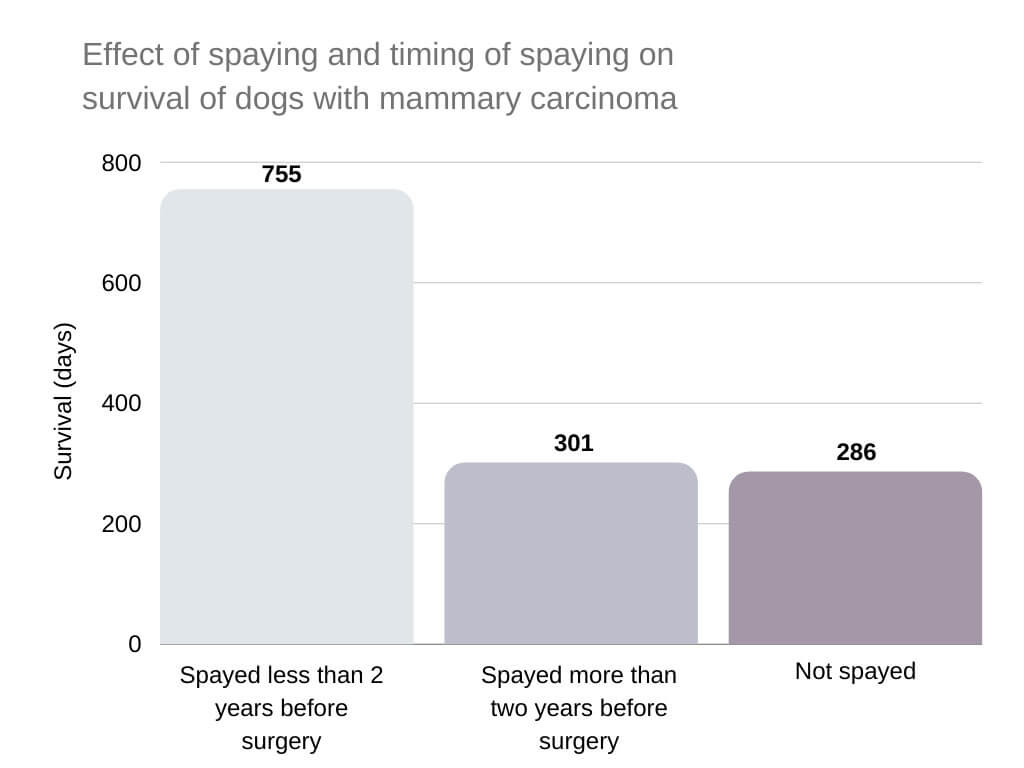 Chemotherapy alone for the treatment of malignant mammary tumors has not yet been proven effective. However, chemotherapy after the surgical removal of malignant tumors can help increase your pet’s survival time [23].

Treatments for mammary tumors in dogs are constantly evolving. Some of the most promising clinical trials are discussed below.

The administration of a recombinant measles virus has shown promise in slowing down the progression of tumor growth [25].

Flutamide is an anti-androgen, or anti-testosterone, drug. Despite most tests of the drug’s effectiveness being conducted on mice, the administration of flutamide has been shown to inhibit metastasis and reduce tumor sizes [26].

In aggressive cases of mammary tumors, surgery may not be enough to increase survival time. Treatment with oxytocin or desmopressin may have beneficial effects on simple carcinomas, although further studies are required [27].

One of the most significant factors that affect your pet’s prognosis and life expectancy is early detection.

Mammary cancer in dogs progresses in stages and the later your dog is treated, the lower its chance of survival.

There are five stages of mammary tumors in dogs. The stage of your pet’s cancer could help determine the right treatment, prognosis, and life expectancy.

The characteristics of each stage follow the tumor size (T), spread to regional lymph nodes (N), and distant metastasis (M) [30].

Details on each stage are listed below:

Dogs with mammary tumors are often treated with surgery, after which your pet may need chemotherapy or palliative care. This can be provided through veterinarian-prescribed medicine and alternative remedies. Most of these treatments are aimed at reducing pain. 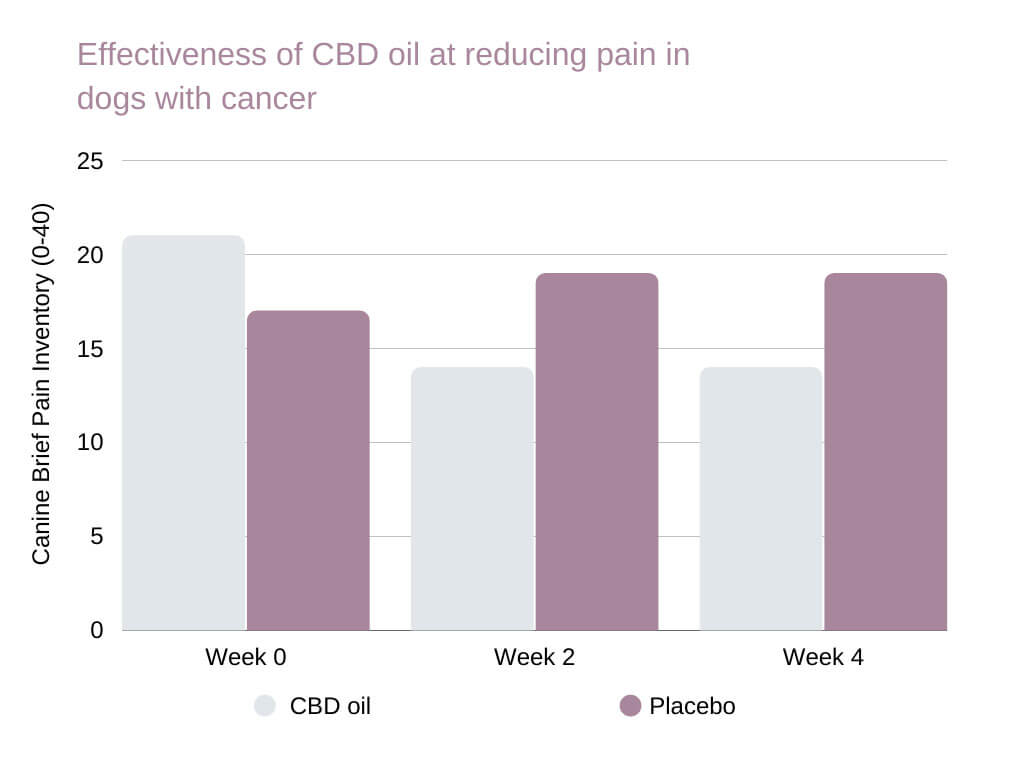 The life expectancy of a dog with mammary tumors depends on several factors, including:

When to Euthanize a Dog with Breast Cancer

Putting a beloved pet to sleep is never easy but must be considered once mammary cancer has spread or progressed too far.

If your pet shows any of the following signs, you may need to discuss possible euthanization with your veterinarian:

If you notice any drastic negative change in your dog’s behavior, monitor them carefully and consult your vet to discuss your options.

Below are some of the most frequently asked questions regarding breast cancer in dogs.

Is Mammary Cancer in Dogs Painful?

Benign mammary tumors are not typically painful. However, the characteristics of rapid growth and inflammation in malignant mammary tumors can be extremely painful as they progress and enlarge.

Can Breast Cancer in Dogs Be Cured?

Benign tumors make up about half of all breast cancers in dogs. Benign mammary tumors can be treated with surgery and should not significantly affect your pet’s life expectancy.

About half of the dogs with malignant mammary tumors will experience metastasis, which is extremely difficult to treat.

How Long Do Dogs With Breast Cancer Live?

Average life expectancy after diagnosis and treatment could be anything between 35 days with inflammatory mammary cancer and several years for those with benign tumors.

Survival times for dogs with breast cancer vary greatly depending on the tumor type and growth rate.

What Are the End Stages of Breast Cancer in Dogs?

The final stages of breast cancer in dogs usually start once the tumor has metastasized to other organs. At this point, there is very little that can be done to treat your pet, and you may need to consider euthanization or palliative care to make your dog’s last days as comfortable as possible.

How Common Are Benign Mammary Tumors in Dogs?

Mammary cancer is relatively common in dogs. At least 17% of dogs with mammary lesions will be diagnosed with mammary tumors, and half of these will be benign [37].

Any type of cancer in dogs can be a scary diagnosis. Due to the prevalence of breast cancer in dogs, it is essential to familiarize yourself with the symptoms, diagnostic tests, and treatment options available should your pet show signs of illness or a behavioral change.

Thankfully, most mammary tumors can be treated and, if caught early enough, can be successfully treated to provide your dog with a long, healthy life.