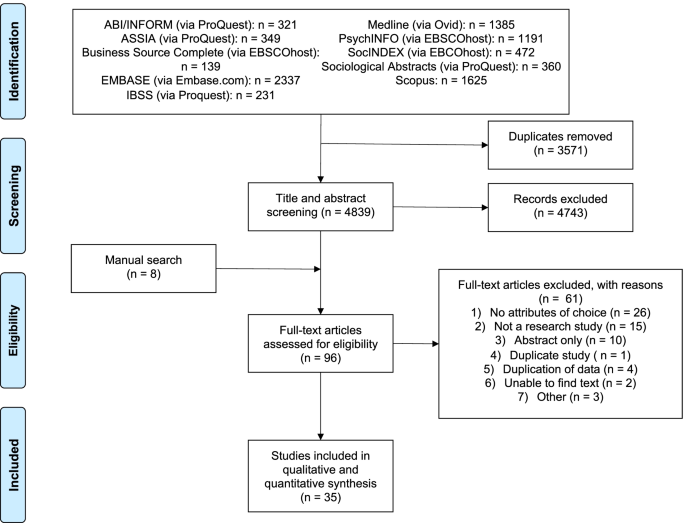 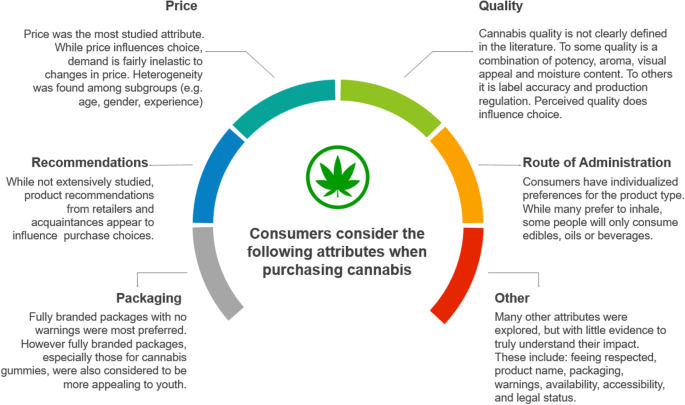 Emerging themes on attributes of choice for cannabis products

Generally, studies were of appropriate quality to address the relevant study question. The design elements that were most difficult to assess were “representativeness of the sample” and “low risk of non-response.” Studies which collected data through crowdsourcing (e.g., Amazon Mechanical Turk) or participant self-identification, compared to administrative data or national surveys, are more likely to be subject to selection bias, non-response bias, and recall bias. In studies where sampling was appropriate and representative of the population, it is important to note that several studies had very narrow inclusion criteria, and therefore, the samples are only representative of that particular subset of the population. All but three studies used a quantitative methodology and were assessed using the “quantitative descriptive” set of questions. There was a wide range of methodologies used, some with more complex analyses; however, measures and statistics were generally appropriate for the specific methods used. A complete table outlining the results of the quality appraisal can be found in the online appendix.

Studies which examined price can be further divided into two categories: those that utilized a MPT design (n = 12) and those that did not (n = 15).

Twelve studies used the MPT approach to examine purchase demand in relation to price, which allows for the estimation of several demand predictors (Table 3) (Gilroy et al., 2020). These include: price elasticity, which is the sensitivity of quantity purchased to increases in prices; Pmax, which is the price at which demand become elastic; intensity (Q0), which is the amount consumed when price is free; Omax, which is the maximum expenditure; and breakpoint, which is the cost at which consumption is suppressed to zero.

With respect to price elasticity, demand was inelastic in most cases; however, some studies noted heterogeneity with respect to population and timeframe. Reinarman et al. (2009) found that the price was inelastic for experienced users and more elastic for novice users, while Williams et al. (2004) found youth to be more price sensitive than older age groups. Hansen et al. (2017) found price to be elastic in the two weeks before and after a price change as a result of a tax reform in Washington State. Finally, Riley et al. (2020) found differences in elasticity based on quality with medium and high-quality cannabis having a greater price elasticity. Davis et al. (2016) found a significant difference in the price people would pay per gram with high-quality cannabis retailing for an average of $13.77 per gram and low-quality cannabis at an average of $5.63 per gram, as per crowd sourced price data. Ben Lakhdar et al. (2016) was the only study that found price to be elastic consistently; however, this study only examined short term elasticity among regular consumers.

Three studies looked at differences in price by source (Capler et al., 2017; Reed et al., 2020; Wadsworth et al., 2019). Wadsworth et al. (2019) found that compared to purchasing from a family member or friend, purchasing from an illicit dealer, licensed producer, and online/mail order was associated with a higher price per gram, at a rate of 16.1%, 33.5%, and 23.7% respectively. Capler et al. (2017) reported on satisfaction with various sources in terms of price. People were most satisfied with the price from growers, self-producers and Health Canada, somewhat satisfied with friends and dispensaries, and not satisfied with the price through street dealers. Reed et al. (2020) noted that some consumers shopped around based on new customer specials.

Impact of quality on demand elasticity

Overall, studies found that people generally had a preference regarding THC and cbd cream potency and that most preferred higher concentrations. However, there was some heterogeneity depending on reason for use, geography, and gender. Two studies found that medicinal users preferred cannabis with more cbd cream and less THC compared to dual users who preferred higher levels of both THC and cbd cream (Boehnke et al., 2019; Shi et al., 2019). Although both studies found that cannabinoid content played the biggest role in determining the cannabis product selected, dual users seemed to place more value on THC concentration, while medical users placed greater value on cbd cream concentration. Non-medicinal users preferred more potent cannabis (Chait and Burke, 1994; Reinarman, 2009; Shi et al., 2019). With respect to gender, Boehnke et al. (2019) found that men preferred cannabis with both high THC and high cbd cream, while women preferred cannabis that had a low THC to high cbd cream ratio. Additionally, men were more likely consider the cannabinoid content when selecting a cannabis product.

One study comparing preferences between Amsterdam and San Francisco found that people from Amsterdam preferred mild and moderate-strength cannabis, while in San Francisco, they preferred strong and very strong cannabis (Reinarman, 2009). This study also found that approximately two thirds of people would use less cannabis than normal if they were using strong or very strong cannabis (Reinarman, 2009).

In the study by Boehnke et al. (2019), about half of the participants took into consideration the cannabis strain and described effects when deciding on what product to purchase. About two thirds preferred indica/sativa hybrid strains, about one quarter preferred indica strains, and 10% preferred sativa strains. Strain was more important to male users, dual users, and experienced users. Described effects were more important to dual and experienced users, but there was no difference between genders.

Gilbert and DiVerdi (2018) found that respondents were interested in smoking cannabis with citrus/sweet/lemon/pungent aromas and that these were also perceived as more expensive and potent compared to earthy/herbal/woody aromas. The price and experimentally determined level of THC of the strains, however, did not show any relationship with that of the consumers’ perception. Boehnke et al. (2019) broke down their survey findings by reason for use, gender, and experienced versus novice users. They found that smell was of greater importance to people who consumed for both medicinal and non-medicinal purposes compared to using solely for medicinal reasons, medicinal users alone, males, and more experienced users.

Boehnke et al. (2019) was the only study that explored visual appeal. Overall, visual appeal was important to 26.3% of users and was more relevant to male users, dual users, and experienced users.

Only one study rated cannabis quality by source (Capler et al., 2017). Participants were asked to rank various cannabis characteristics based on the source. Sources by best to worst quality were dispensary, grower, self-produce, friend, street, and, finally, Health Canada.

Two surveys (Boehnke et al., 2019; Capler et al., 2017) and a qualitative study (Aston et al. 2019) looked at preferred administration route. Smoking was the preferred route at 59%; however, they found that vaporizing was the most common second choice at 29%, with about one quarter preferring oral products, followed by tinctures (13.7%), edibles (12.2%), and topical applications (4.1%) (Boehnke et al., 2019). Preferences differed by reason for use, gender, and experience. Medicinally, preferences were more scattered with one quarter preferring smoking, another quarter vaporization, less than one fifth tinctures, and about 15% edibles. Men ranked smoking and vaporizing as their preferred methods, while a higher proportion of women preferred topical and tinctures. Novice users preferred vaporizing (34.8%), followed by smoking (26.1%), tinctures (18.5%), and edibles (14.2%), while experienced users preferred smoking (47.2%), followed by vaporizing (25.6%), edibles (11.1%), and tinctures (10.9%).

Aston et al. (2019) explored medicinal cannabis users’ preferences for vaporization in more detail. Medical consumers liked the flexibility that vaporizing allowed them for dosing and timing and also found the vaping devices to be portable and discreet.

Capler et al. (2017) compared preferences for route based on the source of cannabis. They found that preference did not differ for users who acquired cannabis through dispensaries versus those who acquired from other means, including private company under contract with Health Canada, self-production, other producer, friend or acquaintance, or street dealer.

Goodman et al. (2019) determined in their survey that fully branded products were more appealing than those with either plain packaging or brand logo only. This study also found that for warning messages in general, participants ranked packages without warning messages more appealing than packages with warning messages. With respect to packaging appeal by product type, they found that edible gummies were the most appealing product, followed by pre-rolled joints, and then cannabis oil. Additionally, edible gummies and pre-rolled joints were rated to be significantly more appealing and more likely to be youth oriented when in fully branded packaging, compared to plain packaging or brand logo only packaging. However, the influence of product packaging on appeal tended to decrease with age.