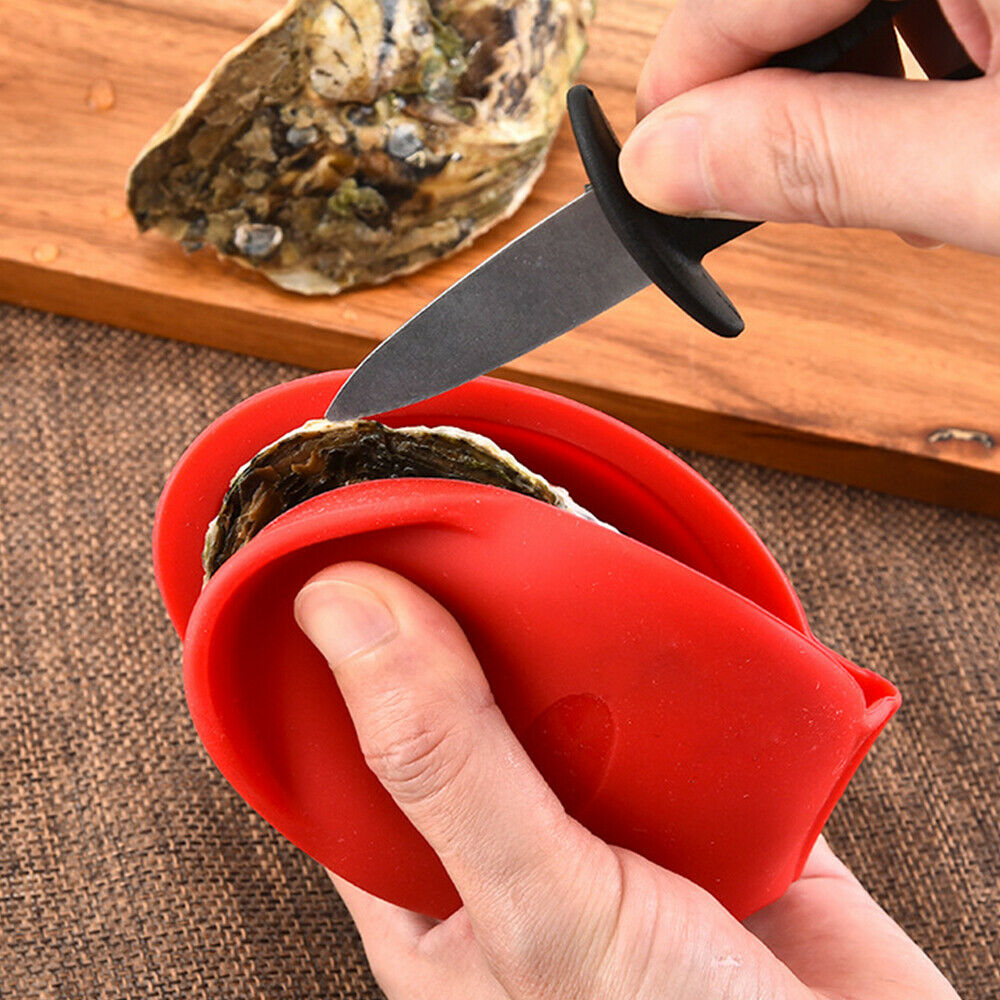 My first choice for the photo was a bloody hand from shucking an oyster, but the only one I could find was horribly graphic, so I settled for the dumbest looking tool I could find! Yeah…we had guests last night and I felt like oysters, but miscalculated exactly how difficult the ones I got would be to open. Six from the Chesapeake and six from Oregon. Apparently the first three were normal, but the next nine were sealed with industrial epoxy. Luckily they were delicious! And different. Whenever I buy oysters I tend toward ones I have never heard of, just because it’s so much fun to discover how different they can be. The typical oyster around these parts is the Blue Point, which is sort of generic; briny, a bit meaty, a bit of everything. They are good, because oysters in general are good, but there are better ones to be had from other parts of the country. Doesn’t that look easy? And yes, they often are that easy…until they aren’t. My sink was filled with chunks of oyster shell that I had broken off the hinge ends of several of the little buggers. I even have that very same oyster knife and kitchen towel. But not with green stripes! That must have been the problem… I really don’t understand why oysters are sometimes so resistant to being opened and consumed.
******
I am tempted to make this section a weekly mocking of the pathetic clown show that is our government’s inflation data. Because it is obviously wrong on all counts. If they are going to fake it for political gain, at least have the courtesy of doing a better job of it. Brussels Sprouts: $4.99/lb.
Cauliflower: $4 each
Yellow Onions: $1.29/lb.
Maple Syrup…(just checking that you are reading the content)
Bacon: $7.99/lb.
****** 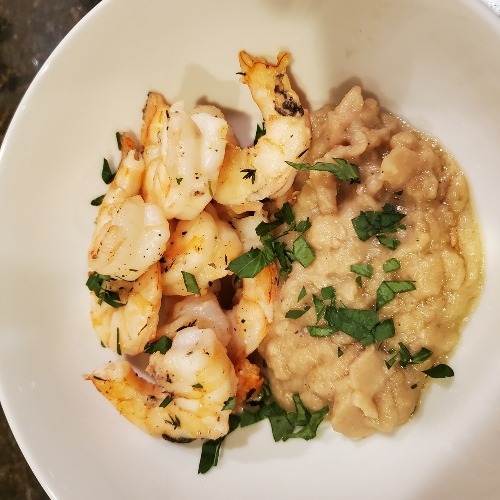 This is a really simple and really good dish that I am sure I have written about before, but my brain is mush so here it is again! Shrimp and Cannellini beans is about as easy as cooking gets. it takes awhile because the beans should go for a few hours, but there is nothing complicated or difficult about the dish. All I do is sauté some garlic in more olive oil than I care to discuss until it is fragrant but not burned and nasty. Then dump a can of beans into it along with salt, pepper and a splash of white wine. And if you use anything other than the crappiest white wine you stole from the hobo on the corner I will haunt your dreams. If you are really fancy and want to put on airs you can use some oregano also. Cook for a couple of hours on low, until the beans have broken down and gotten sort of creamy and thick. Broil peeled shrimp (salt, pepper, olive oil) for a few minutes, just until barely cooked. Do not overcook.
Do not overcook.
Do not overcook. Serve with the beans and some chopped parsley. I told you it was simple.
******
This is my current mixing rye, mostly for Manhattans and Old Fashioneds. It strikes me as just a bit sweeter and has a more muted spiciness than many sipping ryes. I think it works wonderfully with those two cocktails I mentioned, and it is not unreasonably priced either, which is good, because I drink a lot of it. Dildo’s Old Fashioned 4 ounces Rye (100 proof at least)
1/2 ounce Maraschino Liquor
1/2 ounce Brown Sugar simple syrup
2 dashes Angostura Bitters
2 dashes orange Bitters Stir in lots of ice for 30 seconds
Strain into a lowball glass with a large ice cube
Garnish with an orange twist (and a Maraschino cherry if you are putting on airs)
******
I found this recipe on a website that is dedicated to Passover dishes, but upon reading it I realized that A) it has nothing to do with Passover, 2. it needs some major tuning for it to be good, and three, it’s moronically simple, so it is just perfect for…you know…Morons! Potato, Thyme & Olive Oil Gratin is a perfectly serviceable recipe as long as you ignore the idiotic amount of olive oil. Double it, using part of it to drizzle on the top when you uncover for the last 15 minutes of cooking.
******
Oh yes, I will be making this…preferably outside, because while I love fried foods, I dislike smelling them for a week after I make them. Yes, I need a new ventilation system in my kitchen, preferably one that is powerful enough to suck small children and dogs into its fan.
******
During my weekly slog through the bowels of the internet, looking for interesting stuff for you maniacs, I came across a sniveling little wormy complaint about …oh…pretty much everyone who has a kitchen and a computer. “WHY DON”T YOU USE COOKBOOKS INSTEAD OF THE INTERNET?” First of all: Shut the fvck up…I’ll do what I damned well please, and if that means getting all of my recipes from pronhub.com then that’s what I will do! And another thing, most cookbooks are focused on a particular cuisine, so a typical search requires multiple cookbooks if you want, for instance, a good roast chicken recipe. The internet’s utility lays in its wonderful search possibilities. Third: shut the fvck up. Addendum:And one more thing! Commenter “Lizzie” just bitch-slapped you…she points out that internet recipes often have comments that can be illuminating.
******

******
Brussels Sprouts that aren’t as tough as trees, beef short ribs that have meat on them (not the stupid little sliver of bone they sneak into the packages), carrots that don’t taste like stalky chalk, spare bottles of Van Winkle Special Reserve 12 Year Old Bourbon, an herb garden that actually produces herbs (but no basil!), well-marbled NY strip steaks and elk backstrap to: cbd dot aoshq at gmail dot com. And don’t think that you are off the hook with maple syrup and French Toast: I’m watching you…all of you! And I am watching you perverts who shake Manhattans and keeping a list for the Burning Times. Posted by: cbd gummies at 04:00 PM