I recently talked with Anne Byrn, aka The Cake Mix Doctor, former Food editor of the Atlanta Journal-Constitution and author, about Arkansas baking. Byrn, whose books include “A New Take on Cake,” “Skillet Love,” “American Cookie” and “American Cake” in addition to her “Cake Mix Doctor” titles, is working on a book — expected to be out in fall 2023 — about Southern baking.

Naturally, the conversation turned to sweets. We talked about desserts specific to Arkansas, desserts that might have originated here but migrated elsewhere, desserts from other places that Arkansans put their own mark on and whether sugar belongs in cornbread.

Of course, possum pie (aka Four-Layer Delight, Five-Layer Delight and as my Granny Tommie called it, the Next Best Thing to Robert Redford) was at the top of the list. But there were several others that came up in the conversation — Searcy County chocolate rolls, Cherry Nut Pie, Heavenly Tomato Cake — that I think are more deserving of the spotlight.

Don’t get me wrong, no matter what you call it, that combination of crumb crust, cream cheese, nuts, chocolate and vanilla puddings and Cool Whip is delicious. Other notables include blackberry jam cake; hummingbird cake; butter, sugar and egg pie; raisin pie; and caramel cake.

With Valentine’s Day just around the corner, it seems like a good time to revisit a few of these sweet creations — whether for your sweetie or because you’re sweet on Arkansas. 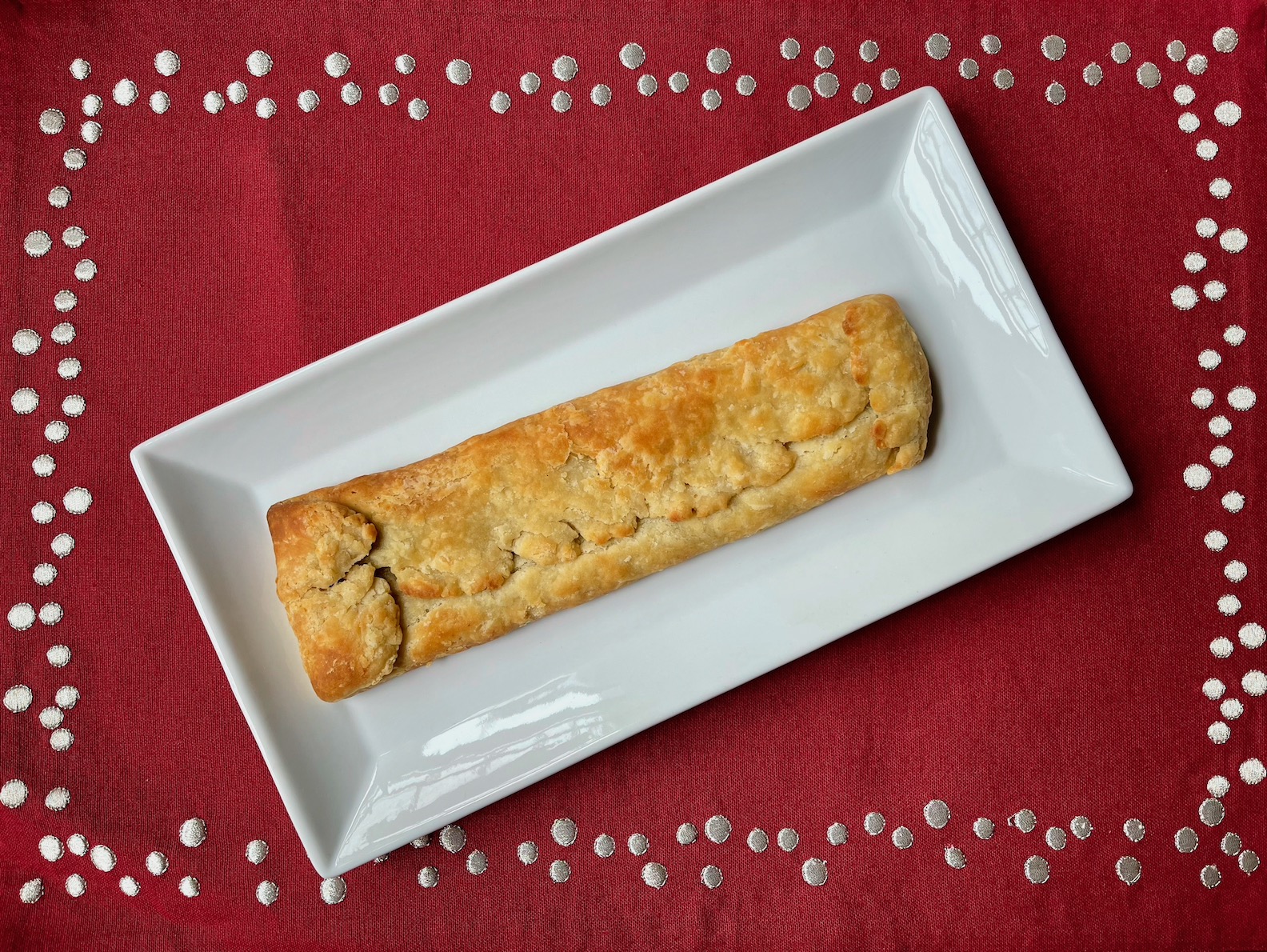 Chocolate Roll (Arkansas Democrat-Gazette/Kelly Brant)  If you’ve never had a chocolate roll — not to be confused with a chocolate-filled cinnamon roll or a Swiss cake roll — you’re in for a treat. The confection is in the same pastry vein as fried pie, but it’s not fried and it isn’t pie. It’s a rich, piecrust-like pastry filled with cocoa, sugar and butter, folded closed and baked until golden brown. These rolls are a delicacy of northern Arkansas, but especially in Searcy county — the self-proclaimed Chocolate Roll Capital of the World — and a must-have reason to stop in Marshall or Leslie while driving U.S. 65.

Published recipes for chocolate rolls are few and far between. We’ve published a handful over the years in Idea Alley, and I found two other recipes online. One is on Kat Robinson’s Tie Dye Travels site and another on the Searcy County Arkansas Chamber of Commerce Facebook page. The major difference between the two is the crust. Robinson’s is light (in color and texture) and meltingly flaky, and the other slightly sweeter and more golden in color thanks to corn syrup and an egg.

I’ve made both, and they are delicious.

My introduction to chocolate rolls happened at Misty’s in Leslie. When you walk into Misty’s — part gas station, part convenience store, part restaurant — one of the first things you see is a shelf full of fried pies in an array of flavors, and stacks of chocolate rolls. According to arkansas.com, Misty’s baker is a four-time champion in the Chocolate Roll Contest and Festival, held annually (prepandemic) in Marshall.

One definitely needs a plate and fork to enjoy a homemade chocolate roll warm from the oven. For a portable treat, let them cool completely and wrap them in plastic film. 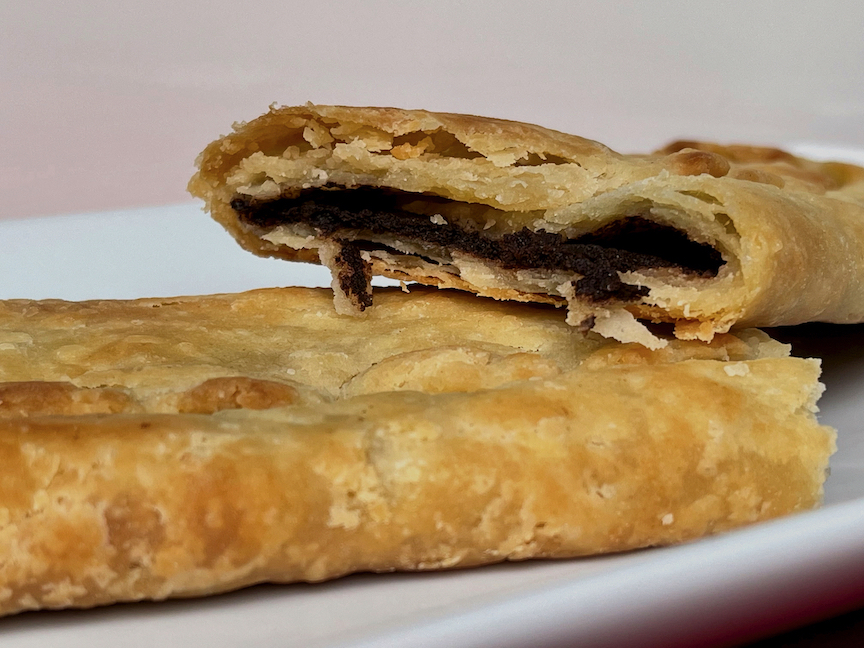 In a mixing bowl, stir together flour and salt. Add shortening and mix well using a fork. The mixture should look like very coarse crumbs. Set aside.

In a separate bowl, whisk together the water, vinegar, corn syrup and egg. Stir the wet mixture into the flour-shortening mixture. Turn out onto a lightly floured surface and using your hands continue mixing just until you have a very soft, uniform dough. Divide into 4 to 6 balls. Set aside.

In a medium bowl, cream together the cocoa, sugar and butter.

On a lightly floured surface, working with one portion of dough at a time, roll each ball into a 7-by-12-inch rectangle. You may need to lightly dust the top of the dough as you roll, but try not to incorporate too much additional flour.

Spread filling lengthwise down the center of each rectangle, leaving about an inch bare on each end. Fold one side to the center and then fold the other side so that it overlaps the first fold. Fold each end over, pressing to seal.

Transfer rolls to a parchment-lined baking sheet. Bake 12 to 14 minutes or until golden brown. 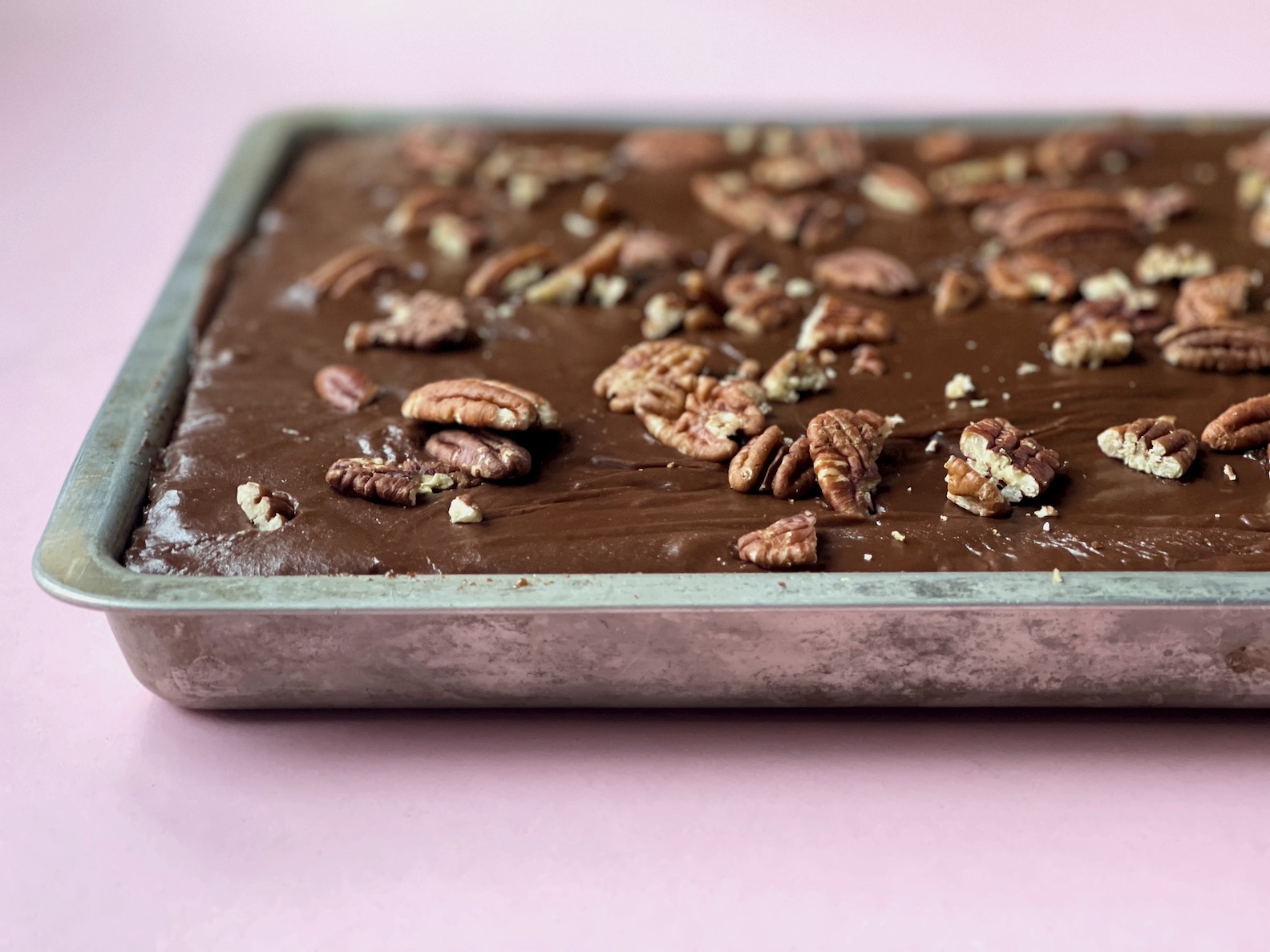 Heavenly Tomato Cake (Arkansas Democrat-Gazette/Kelly Brant)  Heavenly Tomato Cake, for the uninitiated, is not a joke or prank. It is a deliciously rich, moist chocolate cake that just happens to have tomato juice in it. The cake is reminiscent of Coca-Cola cake but, we think, with more depth. The Arkansas Democrat first published a recipe for heavenly tomato cake on June 10, 1976, in a story about the Bradley County Pink Tomato Festival, where it is the traditional luncheon dessert. Our recipe for the cake comes from the festival’s 50th anniversary cookbook.

Most recipes call for mixing the nuts in the icing, but we prefer to sprinkle them on top — we find it visually appealing and easier for the nut-averse among us to pick off.

In a large mixing bowl, cream butter, oil or shortening and sugar. Add eggs, one at a time, beating well after each addition.

In a separate bowl, stir together the cocoa, baking soda and flour. Add to creamed mixture, mixing thoroughly. Mixture will be quite thick.

In a third bowl, combine the hot water, marshmallows and tomato juice. Add to batter and beat until smooth. Mix in vanilla. Batter will be thin and the marshmallows will rise. Transfer batter to a greased 15 ½-by-10 ½-by-1-inch pan. Bake 35 minutes or until a wooden pick inserted near the center comes out clean.

Place confectioners’ sugar in a large bowl; set aside.

In a medium saucepan, combine the butter, juice, water, cocoa and salt. Heat to boiling. Pour over sugar in bowl and beat well. Add nuts (if desired) and spread on hot cake. Or, the nuts can be sprinkled on immediately after icing. 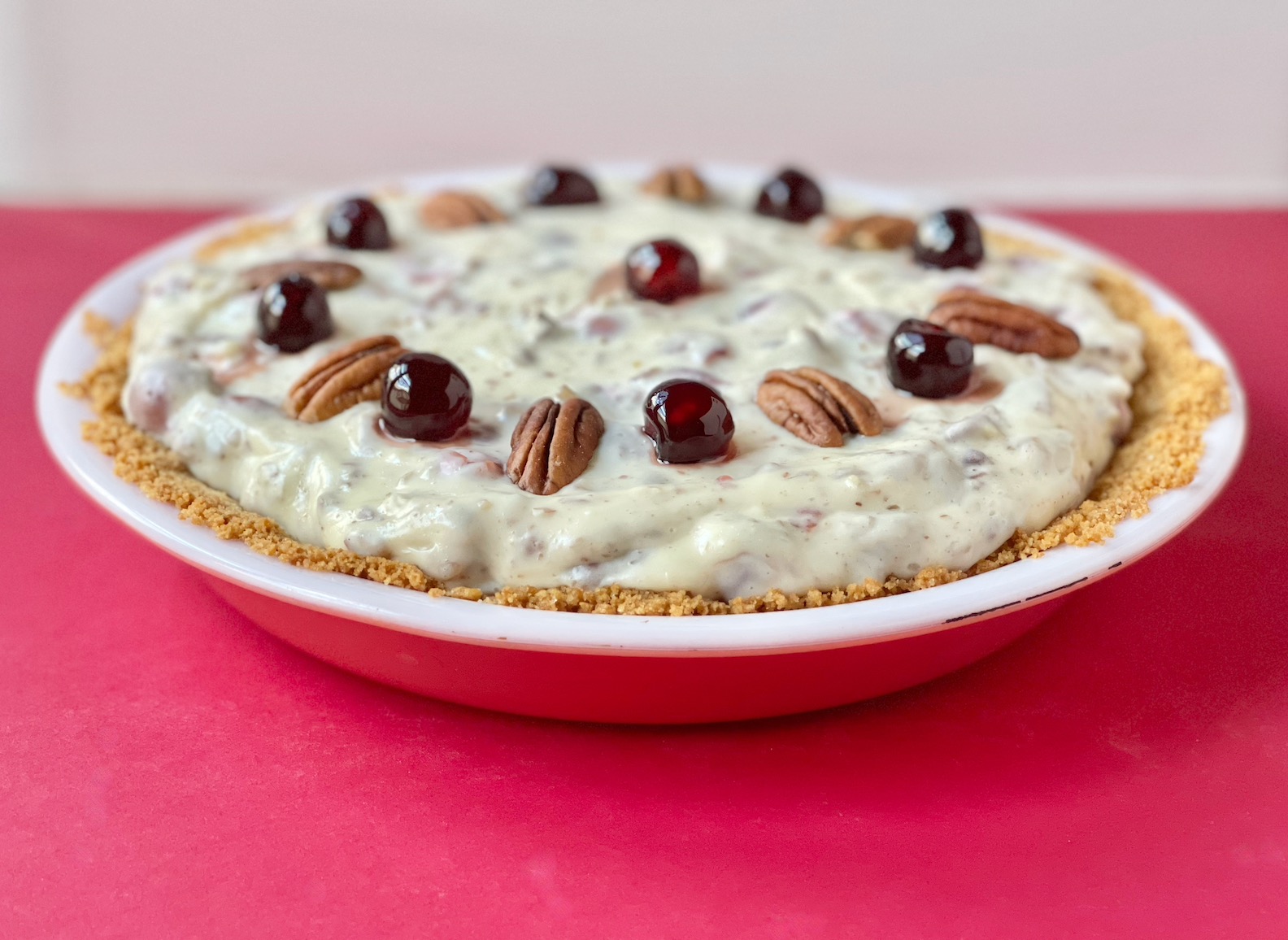 Cherry Nut Pie made with canned tart cherries in a vanilla wafer crust and garnished wtih pecan halves and candied cherries (Arkansas Democrat-Gazette/Kelly Brant)  Roy Fisher’s Steak House on Broadway in North Little Rock was famous for many things, but its Cherry Nut Pie ranks among many Arkansans’ favorites. Two popular versions of the recipe are in circulation — one that was published in Idea Alley in 1975 and one in Robinson’s “Another Slice of Arkansas Pie.” The recipes differ in type of crust (vanilla wafer vs. graham cracker), cherries (a whole can of unsweetened cherries vs. ½ cup of dark sweet cherries) and the amount of nuts (1 cup vs. 1/3 cup plus some in the crust).

In a mixing bowl, beat cream cheese until fluffy. Gradually add the condensed milk, beating until blended. Blend in the lemon juice and vanilla extract. Stir in drained cherries and nuts. Pour mixture into a prepared pie crust. Chill 2 to 3 hours or until set.

Note: The 1975 recipe called for a 15-ounce can, but that size is no longer available. We prepared it with a 14-ounce can and didn’t miss the ounce.

Whir the cookies in a food processor until finely crushed.

Transfer crumbs to a medium bowl and stir in melted butter and sugar. Mix until the crumbs are completely moistened with the butter. Pat in the bottom and up the sides of a 9-inch pie plate. Bake for 12 to 15 minutes at 350 degrees or until set. Cool completely before filling.

Combine the crumbs, nuts, butter and sugar in a medium bowl and mix well. Press the mixture into the bottom and up the sides of a 9-inch pie plate. Bake for 12 to 15 minutes at 350 degrees or until set. Cool completely before filling.