The maker of Marlboro cigarettes is plowing $1.8 billion into the cannabis producer Cronos

Altria, the maker of Marlboro cigarettes announced Friday it intends to invest 2.4 billion Canadian dollars ($1.8 billion) into the cannabis producer Cronos, sending Cronos shares up as much as 35% to $14.11 a piece.

Altria has agreed to acquire 146.2 million Cronos shares at a price of 16.25 Canadian dollars per share — a 41.5% premium to the company’s 10-day volume weighted average price on the Toronto Stock Exchange ending November 30, according to Cronos. That was the last unaffected trading day prior to when news first broke that the two companies were in talks for a potential deal, the company said.

“Altria is the ideal partner for Cronos Group, providing the resources and expertise we need to meaningfully accelerate our strategic growth,” Cronos CEO Mike Gorenstein said in a press release.

“The proceeds from Altria’s investment will enable us to more quickly expand our global infrastructure and distribution footprint, while also increasing investments in R&D and brands that resonate with our consumers. Importantly, Altria shares our vision of driving long-term value through innovation, and we look forward to continuing to differentiate in this area.”

Altria’s efforts to enter the cannabis space “coincided with a rising interest among the major tobacco companies to explore the cannabis opportunity in the U.S.,” Vivien Azer, a Cowen analyst recently said.

Read more: ‘An investment of this magnitude provides overall legitimacy to the sector’: Here’s why Wall Street is bullish about the largest tie-up yet between the tobacco and pot sectors

“We have asserted since 2016 that cannabis would be a synergistic incremental growth driver for the tobacco industry given the opportunity to leverage IP around heat-not-burn and vapor technology.”

In June, the venture arm of the UK-based Imperial Brands invested in Oxford Cannabinoid Technologies, a biotech company working on research into active compounds in the cannabis plant known as cannabinoids.

But it’s not just tobacco companies that are rushing into cannabis. Beverage makers have also been entering the industry.

In August, Constellation Brands, the beverage maker behind Corona beer and Svedka vodka, announced a $4 billion investment in the Canadian cannabis producer Canopy Growth, giving it a 38% stake once the deal is complete.

And in September, Coca-Cola reportedly held talks with Aurora Cannabis to develop beverages infused with cbd cream, one of the nonpsychoactive compounds found in cannabis.

Cronos was up 80% this year through Thursday. 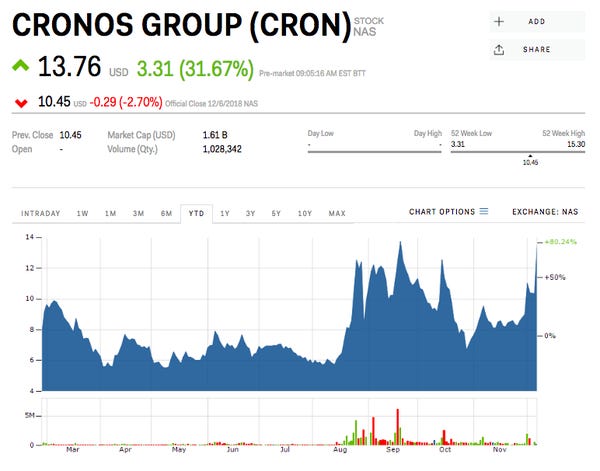