Now that Nashville hot chicken has secured a seat on the United Nations Council of Food Domination, it’s worth taking stock of the hot chicken scene in our fair city. OK, there’s no such body at the U.N., but the worldwide popularity of the hot and humble handheld is undeniable. Here in metro Orlando, we’ve fully embraced the purist renditions served at Chicken Fire, indulged in the Chiang Mai spicer at Swine & Sons, marveled at the meatless wonder from Winter Park Biscuit Co. and bravely downed the conflagration fashioned by the sadists at Orlando Meats (who surely purloined the recipe from demon cooks in hell).

As I sat on a brick ledge eating the electrified poultry sando ($14) served by Jam Hot Chicken in Hannibal Square, it hit me. I’m not talking about round after round of habañero, ghost and Carolina Reaper-tipped bullets firing away inside my mouth. I’m talking about a proper blast of perspective.

I mean here I was, in a gentrified neighborhood that was once home to a thriving Black community, eating a gentrified version of an African American invention. It’s clear that the intersectional issues of race and class and their relation to food have become an important part of the national (and international) conversation. And rightfully so. I was having one with myself, in full view of the Beemers and S-Classes parked on the quaint cobblestoned streets of a square named after a great African general. 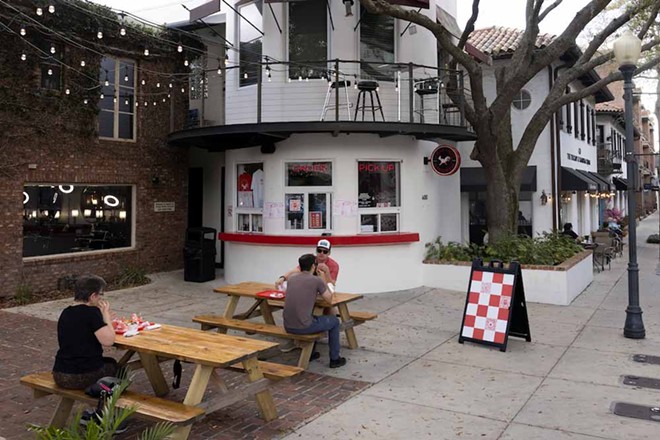 To his credit, Jam Hot Chicken owner Andrew Scala appears acutely aware of his position and makes a point of citing notable Black chefs in Nashville as influences for his brand of hot chicken: Aqui Hines of 400 Degrees, Nick Bishop of Hattie B’s and Ms. André Prince Jeffries, the matriarch of the joint that started it all — Prince’s Hot Chicken. Looking to these revered names (as well as chef Johnny Ray Zone of L.A.’s Howlin’ Ray’s) for inspiration and education seems to have paid off for Scala: Jam’s hot chicken sandwich is absolutely top-notch. It’s got heat — plenty of heat — but this is not a one-note sandwich.

“I vow my hot chicken to be a roller coaster of flavor,” Scala says, and he’s right. He’s also out to craft the finest, which he does by salt-brining Bell & Evans chicken for 24 hours, dipping it into a buttermilk base, then tossing it in a seasoned dredge before frying the breasts in peanut oil. In the sando, an enormous breast is topped with mayo-less slaw and house-made crinkle-cut pickles before being placed into a Turano brioche bun. The bun is rolled in ghee and toasted, and the heel is slathered in “comeback” sauce. I have to say, this could be my favorite hot chicken sandwich in town. 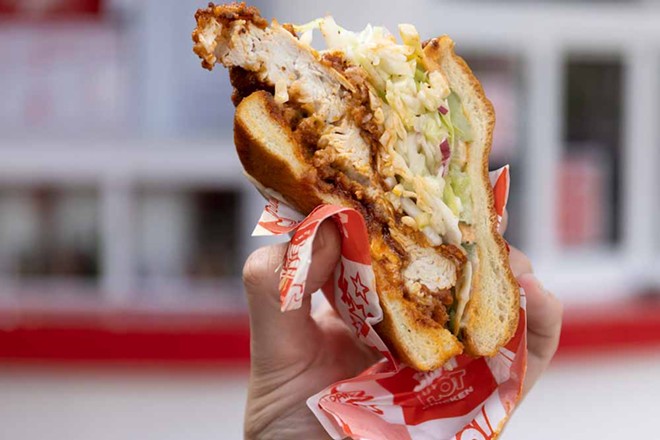 Scala should also be lauded for keeping his hot chicken hot and not pandering to bozos who complain about spice levels. This is HOT chicken, people! You hear? HOT chicken! Even the “Mild” is HOT, so if you don’t like it HOT, go somewhere else. Oh, and if you order it “Jam” hot, like I did on my first visit, they’ll throw in a carton of milk, and believe me, you’ll need it. That said, of the five heat levels offered — plain, mild, hot, hotter and Jam — the “hot” hits my, uhh, hot spot.

Another sandwich on the short menu, the 6th Man ($12), comes with chopped chicken breast, buttermilk ranch and slaw. It’s served with a chili oil dip that Scala makes by boiling habañeros and garlic, then blending them with a mix of butter and spices. Outstanding. Fries, be they lightly salted ($4) or laced with that hot dip ($6), do the trick, but I have a preference for the “Cheddar Bob Mac” ($5), topped with a bit of dry shake for some crunch. Like everything here, it’s just packed with comfort. And Nashville flavor. Jam packed. 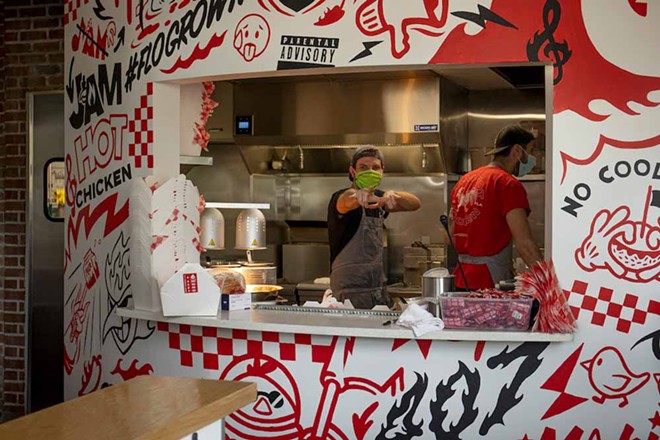