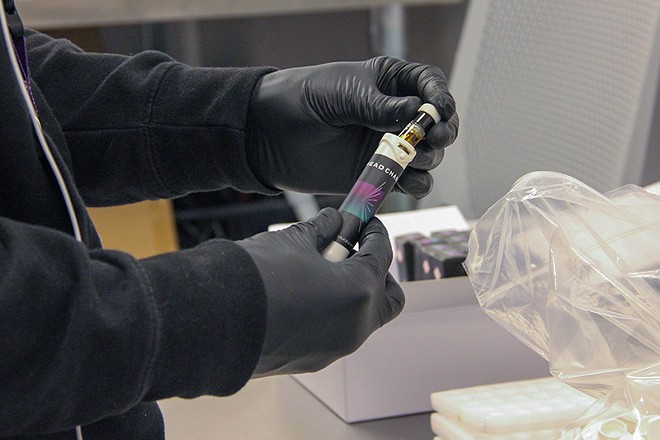 The Curador cannabis lab in north St. Louis has everything it needs to craft its ultra potent line of Head Change “sauce cart” vape cartridges.

It has rooms of twisting glass beakers, an explosion-proof booth for turning plant matter into cannabis concentrate and additional rooms for filling and packing pre-rolled joints. Down a narrow hallway are teams of scrubs-wearing technicians, with some shining lights into the honey-gold glow of cannabis oil destined for vape cartridges.

On a recent tour of the lab, cannabis is everywhere and in virtually every stage of physical transformation. But while Curador and its brands are finding success in Missouri’s medical cannabis market, the first step to making the “sauce” in its popular vape cartridges doesn’t involve its employees emerging from a cultivation room with freshly harvested marijuana plants.

“When you’re talking about sauce carts, we have to have exceptional plant to begin with,” notes Curador CEO Peter Seay, who plays tour guide for the visit.

He adds, “But we don’t actually produce our own cannabis.”

That absence isn’t for lack of trying. Seay says Curador applied for a cultivation license — but was only approved for manufacturing of infused cannabis products.

That rejection created early challenges for the company. In the initial months of Missouri’s medical cannabis market, patients vastly outnumbered operating cannabis producers, and those companies often had their own manufacturing licenses. Supply was tight, and the quality of what was available was often rough.

“The producers didn’t want to sell to us because we were the competition,” Seay notes. He adds that while he and Curador’s team had hoped for more from its license applications, “the cards were dealt and we knew what we had the chance to do.”

Making good on that chance took more than a year, but this summer Curador launched its Head Change line of extracts and concentrates; the products feature cannabis sourced heavily from Heya Wellness, though Seay says the company has worked with multiple producers including Illicit. 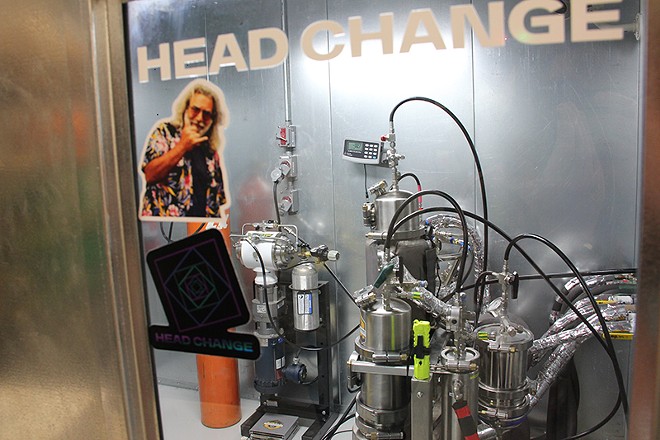 How do they make the sauce? Once the raw flower is dropped off at Curador lab — it’s just one of several cannabis companies using space in a massive warehouse across the street from Bellefontaine Cemetery — the bud makes it’s way to a vault guarded by a thick metal door. From there the cannabis is moved to and treated to a carefully modulated chemical process that (to put it plainly) extracts the essential cannabis substances from the plant and, depending on the process, turns it into various kinds of goo. “Sauce” is just one kind.

Seay says the quality of the cannabis is the “main crux” of the sauce-producing process. If the quality is there, and the methodology correct, the resulting oily concentrate retains the organic flavors and potency of its earlier, leafier life.

While sauce refers to a specific kind of cannabis, Seay cautions that the naming convention for cannabis concentrates is not a settled science.

“I go across the United States and all see the same thing called live resin, resin sauce, diamond carts — I’ve seen tons of different iterations,” he says. He explains that Curador’s decision to go with “sauce” was a reflection of just how faithfully the final vape cartridge resembles the complex, high potency flavors that users might otherwise find in hash oil consumed with a dab rig.

For Cory Sanson, one of Curador’s co-founders, putting Head Change sauce carts and extracts on dispensary shelves has been the culmination of a long cannabis journey, one which most recently included a company that produced cbd gummies-infused dog treats.

But even before that, Sanson says his work in the field of substance abuse recovery showed him just how meaningful cannabis could be for people in need of relief.

“I worked at methadone clinics and was really involved with helping people in the opioid epidemic,” he explains. “I watched people stuck in this cycle, but when people utilized cannabis, it would create this somatic experience. It would allow them, and myself, to find healing.”